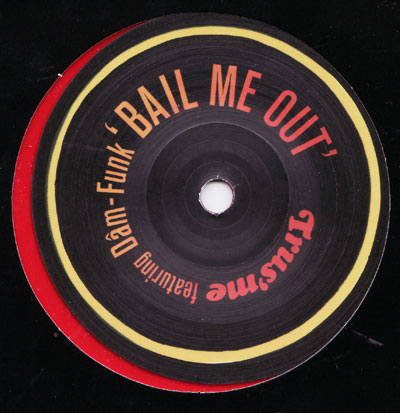 Trusme featuring Dam-funk – Bail Me Out

Limited edition red vinyl one sided 7inch featuring a preview from the forthcoming Trusme album “In The Red”. “Bail me Out” is a collaboration between Trus’me and Dam-Funk and is a low slung, soulful boogie interpretation of the 1981 disco epic “Wheel Me Out” by Was (Not Was).

Trus’me’s second album is released at the start of December and this is a preview of what’s in store. “In The Red” perfectly follows his debut “Working Nights”. On “In The Red” he ups the ante working with singers and musicians including Amp Fiddler, Paul Randolph, Fudge Fingas, Linkwood, Pirahnahead and Dam-Funk.

Known as Los Angeles “Ambassador of Boggie Funk” Dam-Funk is currently making waves with his debut album “Toeachizown” imminent for release on Stones Throw. He has built a huge following through his Funkmosphere parties attracting boogie afficianados from from far and wide.