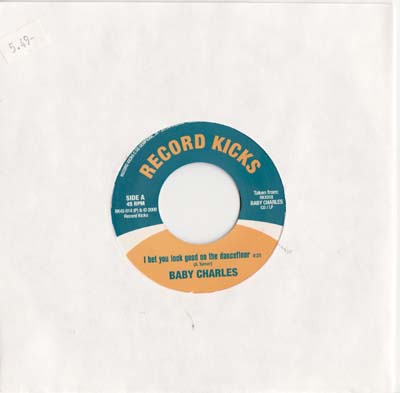 Described by Mojo Magazine as “an act to lead the 2008 soul uprising!”, with two heavyweight 45s (No Controlling Me / Back of My Hand) already under their belt, Baby Charles are back with their third single. Their fans include some of the world’s top funk dj’s including: Snowboy, Keb Darge, Jazzman Gerald, Monk One and Andy Smith, who snapped up their debut 45 for his ‘Let’s Boogaloo Vol 4’ compilation, and got them to play at his Cargo clubnight. Mark Lamarr was so impressed by their debut single, he invited the band to record six tracks live in session for his God’s Jukebox show on Radio2. He also wrote some very complimentary sleeve notes for the debut album (out next 17 March) and first played their Artic Monkey’s ‘I Bet You Look Good on the Dance Floor’ cover on the Jonathan Ross show on Radio 2. That week, the band were bombarded with emails from Radio 2 listeners asking where they could get hold of the track, and when it was coming out…

Finally, the wait is over, and this afro-beat infected funk rework of the Arctic Monkey’s hit single has made it onto vinyl. Soul sensation Dionne Charles delivers her usual gutsy, balls-out vocal performance, while the rest of the band lay down the heavy hypnotic groove. The flip side, ‘Time Wasting’ displays the heavier psychedelic edge of Baby Charles, with an unstoppable chugging groove, a heavy horn-led break, and climatic chorus to finish the track off.