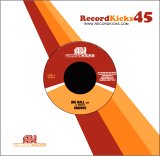 “Somebody’s gonna love you” is taken from Alice Russell debut album “Under The Munka Moon” and also features Quantic probably the most talented and prolific artists in the world of alternative dance music today.  Alice has featured as guest vocalist on music for The Quantic Soul Orchestra, Max Sedgley, Nostalgia 77 and Bah Samba amongst others and has also performed live alongside Roy Ayers and supported Lonnie Liston Smith, Fela Kuti and De La Soul. Whether live or on record, she always performs with her trademark self assurance and sass. You really can’t fake what Miss. Russell’s got!

On the other side James Taylor Quartet certainly needs no presentation as they’ve been the leading lights in the Hammond, mod, rare groove & soul-jazz scenes for the past 15 years. Tough chicken (part I) one of the band grooviest cut ever, is taken from “Message From The Godfather” on Ubiquity Records. Produced by Snowboy, this is a hard-driving B3 Hammond groove with a heavy dose of funk, soul jazz, and “mod”ernist tinges proving that JTQ still have one foot planted firmly in the now and the other, just as firmly, somewhere south of 1970.