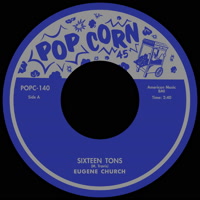 Originally recorded in 1946 by Merle Travis, ‘Sixteen Tons’ went on to become a standard in many circles, and somewhat against the grain an example of a song originally performed by a Country artist which crossed over widely into Jazz and Blues circles. So it is that we have a cracking popcorn R&B style rendition from Eugene Church here, swinging and as snappy as you like. On the back, a top side from the great Titus Turner, whistling and singing an ode to a girl named ‘Coralee’