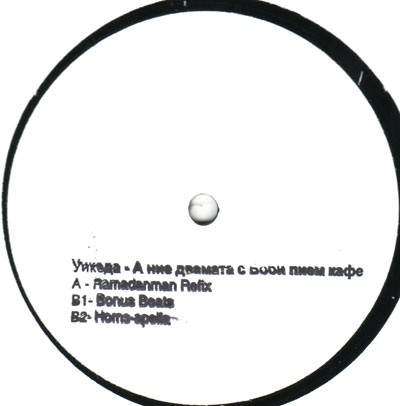 Hand stamped ltd edition of 500 180g vinyl. In early 2009, Ramadanman was approached by the British Council to participate in a
cultural project between the UK and Bulgaria. The Bulgarian public voted for a top 10 of their favourite 90’s Bulgarian pop songs,
which were then offered to three UK producers to remix (the others being Hexstatic and Craggz & Parallel Forces). Ramadanman
chose the Wickeda song “A Nie Dvamata S Bobi Piem Kafe” (“And I and Bobby, We are Both Drinking Coffee”), and remixed it.
The remix was premiered at a British Council -organised club night in Sofia, Bulgaria’s capital, and
beforehand, Ramadanman gave a remix workshop session to local producers. Wickeda are a Bulgarian rock band with a strong
following. “A Nie Dvamata S Bobi Piem Kafe” was a hit single from their first album Revolution which was released in 1999 and sold
over 30,000 copies. Today, Wickeda continue to tour Bulgaria as well as Europe, with regular festival dates.