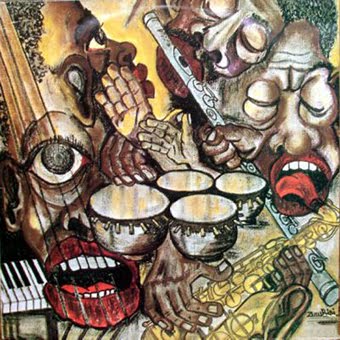 Batsumi is a masterpiece of spiritualised afro-jazz, and a prodigious singularity in the South African jazz canon. There is nothing else on record from the period that has the deep, resonant urgency of the Batsumi sound, a reverb-drenched, formidably focused pulse, underpinned by the tight-locked interplay of traditional and trap drums, and pushed on by the throb of Zulu Bidi’s mesmeric bass figures. The warm notes of Johnny Mothopeng’s guitar complete a soundscape that is at once closely packed with sonic texture and simultaneously vibrating with open space, and in whose shimmer and haze Themba Koyana and Tom Masemola soar. A sonorous echo emanating from an ancient well, reverberant with jazz ghosts and warmed by the heat of soul and pop, Batsumi is nothing short of revelatory.

Many groups from this period did not issue recordings at all, and Batsumi are unusual in even having left an official recorded legacy. Out of print since the 1970s, and never issued outside of South African in its entirety, Batsumi is a landmark South African jazz recording.