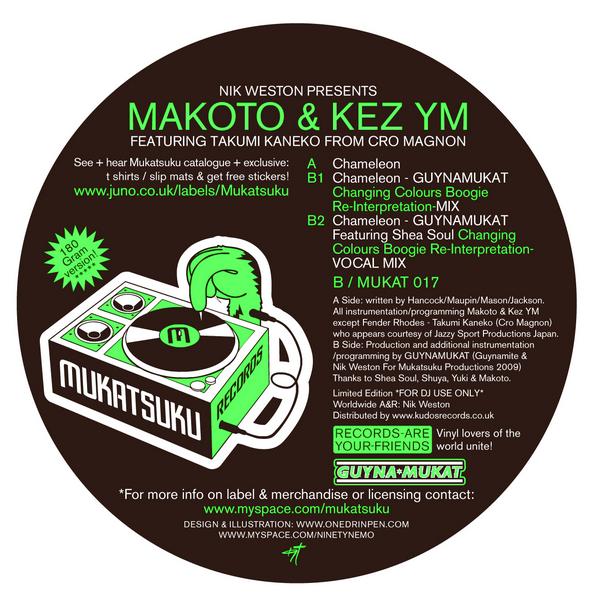 The 6th and final release of 2009 for Mukatsuku Records is from Japanese producers Makoto & Kez YM.

Makoto is perhaps more famous for his involvement with the drum & bass scene since the late 90´s and his releases on the Good Looking label.Kez YM is also perhaps better know for his house productions on labels such as 4lux and Yore.

Back in 2007 Makoto met KEZ YM at the Red Bull Music Academy in Toronto Canada in 2007.A while later when they were both back in Tokyo they started work on a cover version inspired by Makoto´s father who had a large Jazz collection. The original Headhunters version clocked in at 15 minutes so the idea was to construct a new version of the track from the best parts. Later Makoto enlisted the help of Takumi Kaneko from Cro Magnon(Jazzy Sport) to add his Rhodes parts.

In March 2009 label manager Nik Weston was in Tokyo and heard Shuya Okino from Kyoto Jazz Massive playing it at The Room Club as part of his DJ set. After meeting Makoto in London a deal was set to release the track on Mukatsuku and alternative versions were made by GUYNAMUKAT (the production duo of Guynamite & Nik )for their boogie-fied remix assisted by the effervescent Shea Soul (MJ Cole/Mark de Clive Lowe/Phil Asher and now part of the UK Funky scene)for a vocal version.

The track has already had support from Gilles Peterson & Kevin Beadle who both played it at the recent Southport Weekender and have been supporting on their radio shows plus the likes of Domu, Mr Scruff, Faze Action and Jazzanova .