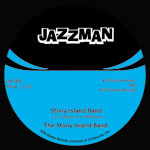 More ‘70s boogie and club soul from our Jazzman 12”s! Nobody digs deeper and nobody does it better! Two tracks originally on the Florida-based Glades label (best known for Timmy Thomas’ classic Why can’t we Live Together), offering some top soulful boogie for the dancefloor…

Jerry Washington’s anthemic Don’t Waste my Time has been in red hot demand on the Northern scene for donkeys years and is a perfect slice of upbeat Southern soul with a sweet guitar line and all-important pounding beat – guaranteed to get the floor moving! The enigmatic Jerry Washington also released some tough funk on the Excello label and wrote the deep funk classic How Long shall I Wait with James Lewis Fields.

Stony Island is a bumping boogie track from 1978 with call and response vocals and a choppy rhythm. The track was originally on the soundtrack of the film My Main Man from Stony Island about legendary Chicago musician and producer Gene Barge (Chess Records in-house arranger and producer for most of the ‘60s). We’re not sure if it’s Gene singing on this track or not, but nevertheless Barge knew exactly what he was doing when making all those hits cos to this day it’s never failed to get the club moving – hey DJs – did you hear that?!