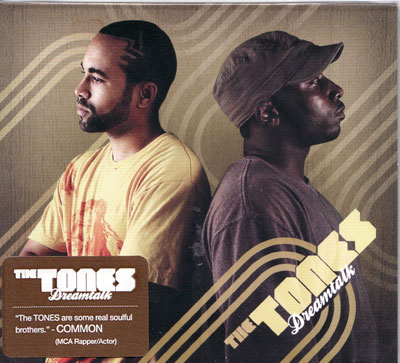 The Tones are progressive masters in the creation of soulful and honest hip hop in its most appealing form. Being compared to the likes of Common, Kanye West, Blackstar, Tribe Called Quest, Slum Village, and Little Brother, many might wonder how such a sound can be derived from the California Bay Area. This versatile duo consists of rapper-producer, Retro, and rapper-singer, Suhn who can sing anything from soul music to opera. Dreamtalk is an album about pursuing dreams and living through the struggles and pleasures encountered on the way. It also gives motivation to others in pursuit of their dreams. Dreamtalk challenges the hip hop community with potent content. With rhymes and vintage beats, The Tones are here to deliver a classic album. Since the group first formed in 2001, The Tones have toured with the likes of Common, Slum Village, Little Brother, Roots drummer QuestLove, and Dr. Cornell West to name a few. Within the same period of time, Suhn and Retro have developed great musical chemistry along with friendship. Together, they have grown from amateurs to professionals, from brothers to fathers, and, from dreamers to conquerors. Still they never stop dreaming. The Tones have ambitions and aspirations to create multi-platinum selling albums and, eventually, become CEOs of their own respective companies.