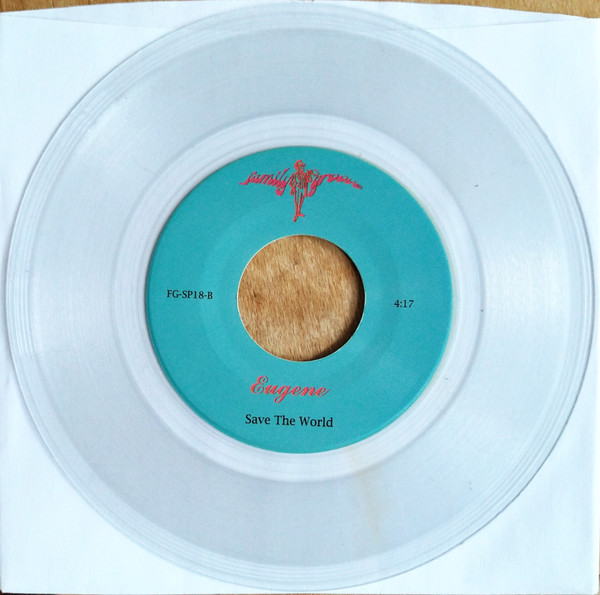 Eugene ‎– World Of Love / Save The World

Another unreleased masterpiece unearthed by the dons at Family Groove.

Eugene Synegal’s early career as a teenager was the guitarist of Sam & The Soul Machine before moving to Los Angeles to join the group Sage and later in the 1970s recording on Lee Dorsey’s Night People and The Neville Brothers records.

These previously unreleased recordings were birthed in the early 1970s, sometime during Eugene’s trips back and forth between Los Angeles and New Orleans. A couple years after these recordings were immortalized onto 1/4″ reel-to-reel tape an unusual crime scene involving Eugene and his girlfriend reads as if it was a chapter taken directly out of a pulp fiction novel. An Australian socialite named Patrica Galea, remained unsolved for 30 years. The robbers took $400, two diamond rings, a $1,400 cigarette lighter and two mink coats. They failed to collect Galea’s $6,402 which was hidden in her freezer. This was the life of Eugene. Playboy extraordinaire, jet-setter and guitar chops that would turn the head of Hendrix!! Around 2006 the owner of the West Hollywood apartment expressed a desire to learn more about its history and met with detectives who were unable to locate the file since it was buried in the cold cases section.

These recently unearthed 1970s recordings by Eugene are a reflection of his pure soul as well as a blend of psychedelia and funk that the band Sage was experimenting with in Los Angeles during that time period.

From a historical sense, these two recordings are significant because it bridges the historical and influential New Orleans music scene during the early 70’s with the psychedelic rock and folk scene that was emerging just walking distance from the West Hollywood apartment that Eugene was living in with Galea during that time.

Eugene’s unique guitar style paired with a deep-rooted gospel sensibility is a window into the artistry and songwriting capability of this incredibly talented man.