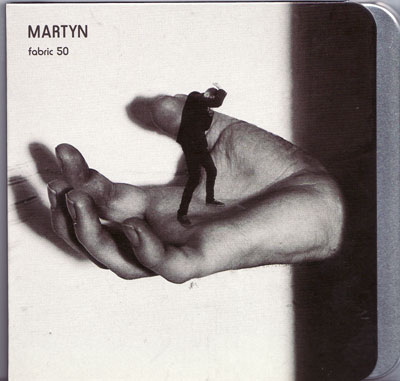 For the 50th installment of Fabric’s celebrated mix series Martyn lays down one of the freshest mixes you’re likely to hear this year. His meteoric rise to the vanguard of all things deep, techy, funky and steppin’ is entirely warranted by a series of deadly productions that surely need no introduction round here. Much like his peer Kode 9, the Dutchman’s DJ sets over the last 12 months have increasingly looked beyond dubstep’s peripheries to the fields of synthfunk, hiphop, housed-up ruffage and broken beat electronix, scanning the oncoming waves of percussively rooted dance music to cherry pick the very tastiest chunks of goodness. For Fabric 50 he’s assorted one of the most enviable trackists around, securing awesome exclusives like Kode 9’s galloping ‘Oozi’, multiple tricks from Zomby on the mindblowing ‘Light Cycle’, ‘Little Miss Naughty’ and utterly immense ‘Mercury’s Rainbow’, and kinky dubs from Roska like his Uncle Bakongo production ‘Afar’ or the killer ‘Without It’. Outright anthems are in no short supply either, coming from Altered Natives ‘Rass Out’, Jan Driver’s rave alarming ‘Rat Alert’, Dorian Concept’s ‘Trilingual Dance Sexperience’, and 2562’s ‘Flashback’. Keeping his brief spread wide, he also incorporates super-solid groove tools from Cooly G, Madd Slinky, Ben Klock, Levon Vincent and Joy Orbison to keep the curve on a brilliantly varied but controlled trajectory for the floor. It’s probably going to be another six months before half of these tracks reach the shop floor, and the other other half are simply stone cold essential, so there’s very little doubt as to what you gotta do here. Immense.