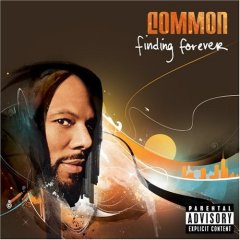 It’s no small feat to follow an instant classic like Common’s Be (2005) but he skillfully builds on that success with a worthy sequel. The two albums share much in common, especially with Finding Forever‘s focus and brevity (under 50 minutes) and especially with Kanye West’s musical direction. The two Chicago natives have forged a strong chemistry together, especially on songs like “Start the Show” and “Southside” where both men appear, but just as a producer, West makes his presence felt on everything from the catchy piano tinkles of “Driving Me Wild” (featuring British chanteuse Lily Allen) to the brass-knuckled “The Game” (featuring DJ Premier). As has become his trademark, Common balances heartfelt earnestness (“Black Maybe”) with clever charm (“Break My Heart”) though he has one too many love songs (“I Want You”). Whether Finding Forever surpasses Be is a matter of individual, song-for-song taste: At worst, it’s on par–a laudable accomplishment for a veteran now 15 years into his career.