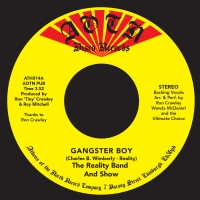 The Reality Band and Show – Gangsterboy

ATHENS OF THE NORTH

One of the rarest disco 45 in the world.

It was recorded in 1977 at Asterix Studios in Wilkinsburg Pennsylvania, 300 copies were pressed up to test the market response which surprisingly was lacklustre. So, as these things go it was forgotten about and everyone moved on to the next thing.