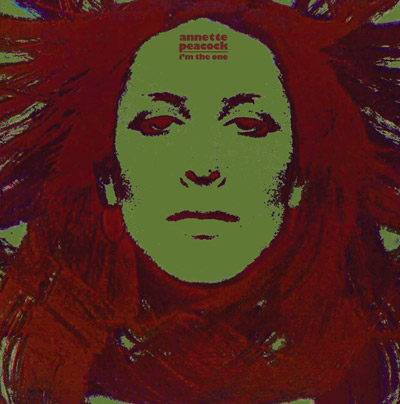 “I’m the one, you don’t have to look any further. I’m the one. I’m here, right here for you,” oozes jazz, rock, and electronic music pioneer Annette Peacock on the leadoff title track of her solo debut LP. The album’s wide range of vocal emotions and diverse sonic palette (featuring Robert Moog’s early modular synthesizers, which the singer actually transmitted her voice through to wild effect) places it firmly at the forefront of the pop avant-garde. Originally released by RCA Victor in 1972 to widespread critical acclaim, I’m The One found itself amongst good company. Both Lou Reed and David Bowie had recently signed to the label—Bowie in particular was enamored with Annette—and artists ranging from ex-husband and jazz great Paul Bley, along with notable Brazilian percussionists Airto Moreira and Dom Um Romao, guested on the album itself. Writing and arranging I’m The One’s nine passionate tracks—bar a unique cover of Elvis Presley’s “Love Me Tender”—the disc grooves easily from free jazz freak-outs and rough and rugged blues-funk to gently pulsing synthesized bliss.