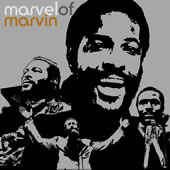 Compiled in conjunction with 4 hero & features bonus 4hero mix cd A man of rare qualities, Marvin Gaye’s work speaks for itself. Away from the public glare he was a complex, unpredictable yet an amusing and charming man. Though not as prolific as other Motown luminaries his work was highly regarded and his classic album, ?What’s Going On?, from which many of these covers are taken, is well within the pantheon of timeless and essential albums, soul, funk or otherwise.The marvel Of Marvin is a similar project to the phenomenally successful ?Wonder Of Stevie? projects earlier in the year, but you will hear a more commercial sound through Marvin Gaye, from the essential and recognisable (Martha & The Vandellas, Otis Redding & Clara Thomas) to the obscure and straight up frenzy inducing (Bobby Taylor & The Vancouver’s and Delroy Wilson) this volume of classic covers, collaborations and cookies will have you asking for more and will make you wanna holler!