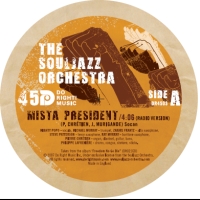 Since 2002, the Ottawa-based band has been keeping the classic sounds of raw, gritty groove alive and well in Canada. Their style combines jazz, funk, African and Latin music with messages touching on politics and spirituality.

“Mista President” evokes not only the spirit of a certain Mr Anikulapo-Kuti, but also a packed Shrine going nuts. ´Insurrection´ on the B-side is a more straight-up funk cut that will induce feverish shape throwing wherever it is played