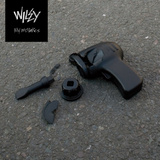 Wiley returns off the back of his critically-acclaimed album “Playtime Is Over” with the explosive late addition, “My Mistakes”. Wiley has described the tune as his favourite on the record because “it tells you all my mistakes and the wickedest thing is, the kids will all listen and still make the mistakes. So that is the joke!”.

Up and coming producer Bless Beats slams together gigantic, booming kicks, digital finger snaps and orchestral cut-up while Wiley, Manga (Roll Deep) and Little Dee (Eskibeat Recordings) rip through their verses with the kind of fire and belief that shows they’ve lived their particular string of errors. The whole is held together by a classic, lopsided-but-perfect sung Wiley chorus that gets inside your head and stays there.