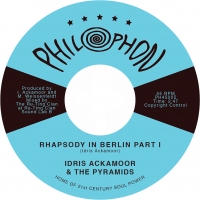 Idris Ackamoor & The Pyramids – Rhapsody in Berlin Part 1 and 2

After the reissue of their three private pressed albums from the 70’s and the European tour in 2010 followed by the release of a new album, the Pyramids, led by multi-instrumentalist – or better: multi-talented artist – Idris Ackamoor, seem to have revived the burning fire that once gave birth to an ecstatic musical concept.

The Pyramids’ honest love for music, their firm belief in its social impact have shaped their story and style: after studying with free-jazz icon Cecil Taylor, the Pyramids left for a journey through Africa in 1972 where they connected with their cultural roots and developed their own musical vision.

On “Rhapsody in Berlin” this vision is still vibrating: a melodic horn theme interplays with a Pygmy flute, some driving riffs and a heavy funk rhythm. The music will walk you through an enchanted jungle that seems somewhat quiet at first – despite the sense of its hidden power. Suddenly but elegantly the music explodes and the saxophone takes off and flies freely before merging with a singing violin into an ecstasy of percussion.