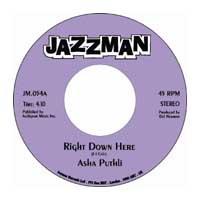 Indian born Asha Puthli – bored with traditional Indian music and inspired by the jazz on the radio in Bombay – moved to New York to pursue a career as a singer, and quickly came to the attention of Columbia Records. It was no doubt that it was her unique voice, with the various nuances and textures that can only come from her training in Indian music, that gave her the edge, though it was also those very characteristics that meant releases as a solo artist in the US on an increasingly rock-orientated label were limited, so most of the work she got was session work.

CBS in Europe, however, had other ideas, and her first solo album, simply entitled ‘Asha Puthli’ was released in 1973. By now her sound had been influenced by the glam of the ’70s, and came across in wonderful tones that were altogether soft, smooth, slinky, sultry AND sexy!

Her version of JJ Cale’s ‘Right Down Here’ (A Side) is a perfect example – the combination of crisp drums, ethereal vocals and a deep groove have made this a hip hop and club staple. A few years later and Asha headed for boogie territory with her classic ‘Spacetalk’ (B Side), a late night sensual groove that works equally well in the club or the bedroom…

Resurrected by clubbers and jazzers in the 90s, we’re determined not to allow Asha’s beautiful voice to fade into obscurity, and, since only a handful of promos were given out in the 70s, both songs have now been immortalized for the first time on 7″ vinyl.