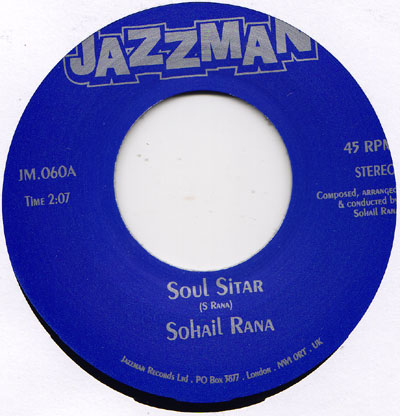 Check out this insane dancefloor sitar funk from Pakistan – backed with some psychedelic sitar titty shaker action from California! World renowned musician and composer Sohail Rana has recorded literally 1000s of songs in his native Pakistan – and among them is ‘Soul Sitar’ – the wildest sitar funk cut this side of ‘Mathar’! Taken from the über rare ‘Khyber Mail’ LP from 1970 – only issued in Pakistan and sought after by clued up beatdiggers ever since, ‘Soul Sitar’ is Pakistan’s answer to the hip sounds that were floating around the cosmos at the time. The fusion of groovy sitar with hard drums, psychedelic electric keys and slinky vibes has proved a winner in clubs with all turned-on and open-minded individuals – now everyone can have a chance to shake and shimmy to this eastern twister! On the other side we have ’Sitar Blues’, an instrumental garage soul monster with psychedelic sitar and eastern vibes that conjures up the groovy summer of love action – in fact it’s an exotic and genuine real deal titty shaker! Performed by the Punjabs – a cool bunch of cats from southern California, they cut this instrumental sitar garage soul workout in 1968 for a pimp known as ‘Prince’ – boss of their sleazy hangout/brothel/go-go club where they used to perform in front of gyrating strippers, go-go girls and their johns! Open your mind and expand your mind – or get down to some nitty gritty, the choice is yours!