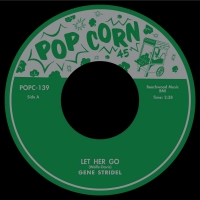 The song ‘St. James Infirmary’ existed in American folk traditions since the 18th or 19th century, but it entered the modern popular music lexicon with Louis Armstrong’s 1928 rendition. Since then, it became a standard for many blues and jazz singers, recorded perhaps a thousand times or more. Hal Waters’ fantastic version from 1960 is notably uptempo and swinging, complete with conga drum breakdowns and jazzy horn stabs. On the flip, Gene Stridel’s ‘Let Her Go’ is a riff on ‘St James Infirmary’ with lyrics which play out as a kind of sequel to the original. The backing music, mid tempo and heavy on atmosphere and drama is pure popcorn!