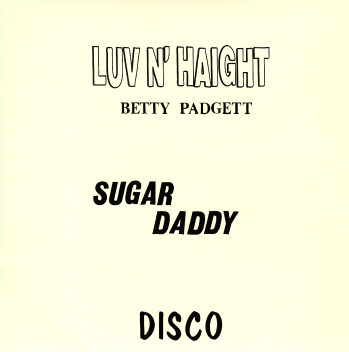 Betty Padgett/ Arthur Foy – Sugar Daddy/ Get Up And Dance

South Florida has produced some great female singers over the years from Betty Wright to Gloria Estefan. But have you ever heard of Betty Padgett? Despite a relatively successful local career the answer is probably not. You’re even less likely to have seen or heard her hard-to-come-by self-titled debut album. Released in 1975 it includes “Sugar Daddy”, a gem of a track that sounds like it could be a Quantic or Mr Scruff production of late. The album will receive a full-length re-issue later in the year, but fr now this 12” includes both the original vocal version and an extended “Sugar Daddy” dub, previously only available on a super-rare12”. This tune alone would normally set you back a few hundred bucks. And Bettys dynamite soul, over such a tasty percussive mid-tempo groove makes it worth every penny.

On the flip-side is an even rarer track by Arthur Foy. Despite coming out of New Orleans “Get Up And Dance” does not sound like your typical Meters, Eddie Bo, etc inspired funk. Instead think deep chocolate soul ala Uno Melodic, Roy Ayers, 80s Ladies, RAMP etc. Down and dirty, and boasting a dance-floor-winning- hook, “Get Up And Dance” is an amazing cosmic soul discovery that came our way via Cool Chris at the Groove Merchant in San Francisco. Copies of the original are rarer than hens teeth and the very few we know about have exchanged hands for $400+.