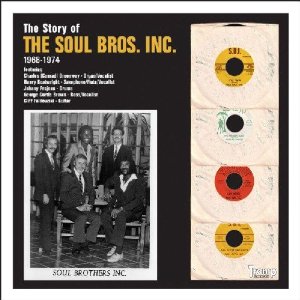 It’s been a hard time for black people in the United States, especially in the 1960s when a series of unbelievable events took place that shocked not only the entire nation but the whole world. musically it was james brown who represented best what the black nation felt. his screams and shouts, his moans and groans helped to release the pressure in a peaceful way. music itself was actually one of the very few opportunities for afro-americans to express their feelings in a raw and uncut way. the music simply translated the conditions of the country that existed in those days. listen to james brown’s powerful ‘cold sweat’ and you can still feel it today. thousands of musicians around the country followed brown’s example and offered their own artistic contributions to spread confidence, hope, and peace for the black nation. One of those many bands were the soul bros. inc. out of houston, texas. they were likely one of the most important funk/soul groups in the city in the late 1960s until they broke up in the mid `70s. I had the pleasure of spending hours on the phone talking to henry boatwright. boatwright played flute, saxophone and sang on many songs as well as composing many of the releases for the band’s own S.B.I. records label. (S.B.I. stands for soul brothers inc.) now it’s time for me to pass the word to mr. boatwright. he is eager to share the story of the soul bros. inc. with you to preserve their legacy for the next 40 years at least.