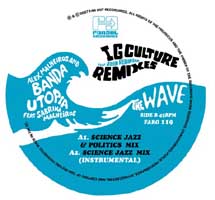 The latest 12″ pressure on Far Out Recordings comes straight out of Rio de Janeiro, via London Town and New York City. IG Culture provides the production injecting a serious hip-hop edge to proceedings with more twists and turns than a New York Subway train.


The original session was recorded in Rio De Janeiro with Alex Malheiros (Azymuth) providing the musical backbone. Guest vocals on the track were provided by daughter Sabrina Malheiros with Dave Brinkworth (Harmonic 33) on production. The original’s cosmic sound was inspired by Harry Whitaker’s ‘Black Renaissance’ (1976) – a spiritual jazz journey of a record which aptly, was one of the first albums to feature rapping.


Originally Far Out commissioned IG Culture to do a re-edit but after he laid down his magic he realised he had enough material to turn in 4 mixes. IG sent the track to over to John Robinson in New York, who then laid down his lyrical prowess to the themes of ‘Science, Jazz & Politics’. Step up IG!


The original mix features IG Culture’s ditty signature drum patterns with Sabrina’s vocals floating in and out over the old skool synths. John Robinson’s vocals are clear yet cutting and immediately the connect between MC and Producer is apparent.


The remix comes dressed in an instrumental as well as the full vocal version. These two tracks are definitely the cuts for the floor. The beats are less complex but much groovier and combine with string bends on the double bass to add a true jazz/headz/hip hop flavour.


‘The Plan mix’ stands alone but mighty high in this fresh as you like EP. Drum splices galore, cinematic explosions and then 4mins in the track breaks into a blue note groove in digital. Is that the ‘ain’t it funky now’ sample in the background? You betcha!


The 12″ is sure to appeal to fans of jazzed-out live hip-hop in the vein of The Roots and Madlib as well as broken-beat heads eager to check out the next moves of one of the fore-fathers of the broken beat movement.


The original ‘The Wave’ soon available on 7″ as part of the new series on Far Out.