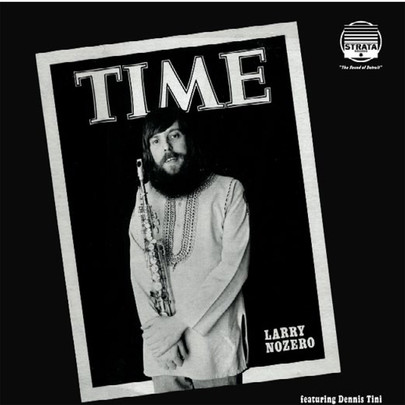 Following on the heels of Kenny Cox’s previously unreleased Clap Clap! The Joyful Noise, 180 Proof Records continues to bring new life to the Strata Inc. Catalogue with Larry Nozero’s 1975 passion project, Time. The last album to be released on Strata Inc., Time is a dream- like mix of mood, an album full of range, tempo, and feeling; from the impulsive and airy rendition of the jazz standard “All the Things you Are” to the brooding melancholia of “Tony,” Nozero’s Time is destined to become known among aficionados as a classic of 1970s jazz. Like time itself, each song is open to individual interpretation – something Nozero himself confessed to on the album’s original liner notes, saying “It got so deep that we decided to call the group and our album after that concept of TIME, because it seemed to mean something to just about everyone.”

A native of Detroit, the flute player on Eddie Russ’ “Lope Song”, Nozero spent time in Charles Moore’s Detroit Contemporary 5 (part of Strata Inc.) before being drafted into the military. While enlisted, Nozero capitalized on his time by honing his craft in the Army Band. By the time he returned to Detroit, Nozero had little trouble landing high-profile gigs. No stranger to success, Nozero’s previous credits and collaborators include Henry Mancini, Sergio Mendes, and playing Soprano sax on Marvin Gaye’s iconic 1971 album, What’s Going On.

Working with his cousin and collaborator Dennis Tini, Time is unlike many albums of the era in that it truly feels like a work fueled by freewheeling expressionism. The pieces are funky, soulful, strange and soothing all at once. Tini’s stand-out contribution to the album is “Tune for L.N.”, a funk-fueled piece of rhythm-centric jazz. A distinguishing feature of the album is the use of wordless vocalise. The scat work on part two of “Chronicle Of The Murdered House” adds a distinct counterpoint to Nozero’s reedwork, while the high pitch bebop of “Baubles, Bangles and Beads” closes out the album with a carefree and buoyant groove.

Time has been remastered from the original reel to reel masters, along with the artwork, which has been restored and printed ontop Heavy Stock Tip On Gatefold Jackets. Vinyl is pressed on as 180 Gram numbered vinyl. Includes extensive liner notes and never seen before photos.