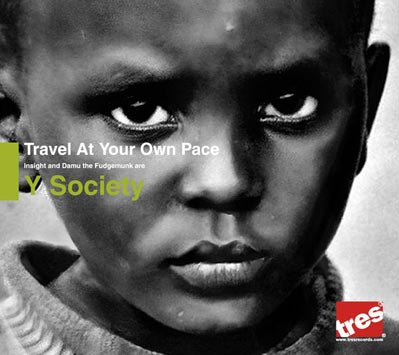 Y Society – Travel At Your Own Pace

Y Society is the duo of like-minded hiphop artists Insight and Damu the Fudgemunk. Infusing elements from hiphop’s past and present; Y Society brings to the table“hard beats & real rap”. The contour of their sound is brought to the table by producer/DJ Damu the Fudgemunk. Damu utilizes the classic combination of old records and a sampler to craft his delectable array of beats. Insight handles the MC aspect of the duo with an uncanny knack for craftsmanship, and earnestness.

Insight has asserted his career over the last decade not only as an MC, but also as a producer and DJ. With an abundance of releases and shows under his belt, Insight is no stranger to the industry. The Boston, MA resident has gained the respect of his peers including Mr. Lif, Edan, and Electric Company. Insight has a consistent ethic of integrity and genuine passion put forth into his music; obvious facts once you listen to him speak.

Damu the Fudgmunk, known also as just Damu, or Fudgemunk, made his initial mark on hiphop as the DJ for Panacea who broke in 2006. The Washington D.C. native plays the role of DJ/Producer in Y Society. Having a lot to express but little to say, he speaks through his MPC2000’s manipulation of his vast record collection.? The science of digging, the studying, and the sheer appreciation for this music are no more evident than in Damu’s beats.

all 2007 will see the release of Y Society’s debut LP,“Travel At Your Own Pace”on Tres Records. Their goal is to make us all consciously aware and proud all over again of hiphop music. The only question is: Are you ready?