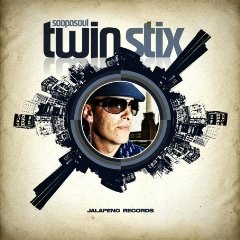 Former rave pioneer and now worldclass funksta, Danny Hybrid rides through the gates of 2009 with a satchel of fresh party monsters by way of his incredible debut Soopasoul album ‘Twin Stix’ on Jalapeno Records.

All recorded with a proper full live band, Soopasoul’s sound puts the live thump well and truly back into the breaks and is a melting pot of soul-sista vocals, infectious brass hooks, floor shuffling, hip swaying jazzy grooves all oozing with the F.U.N.K!

Three Soopasoul singles which feature on the album include – ‘Brand Nu’ and ‘Swing Down’, both Featuring Nikeya Booker and the current smash ‘Hot & Cold’ Ft Dionne Charles, have been firing up the dancefloors and airwaves throughout 2008. Soopasoul’s irresistible grooves have been gaining support from key DJ’s from all corners of the globe – a testament to Soopasoul’s ability to make party music for EVERYBODY!