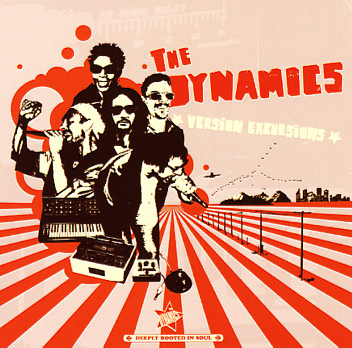 The Dynamics come correct with their debut album “Version Excursions”. Everything from pop, roots, disco, soul & rock is distilled through their fuzzy hypnotic filters. You should not be surprised to see Prince, Curtis Mayfield or the White Stripes on this tracklisting.

Although virtually unknown one year ago, The Dynamics have created a wave thanks to their sound and style, washing past the borders of their native (and not so native) France, to spill the onto the shores of the UK, Europe, North America and Japan. According to vinyl specialists such as Dusty Groove, Picadilly and Fat City Records, The Dynamics are a proper phenomenom! The demand for their 7-inches has prompted reissue after reissue, selling thousands of copies. And this hunger will be temporarily satisfied with “Version Excursions”, their first long player which is deeply rooted in Soul.

The album presents covers of tunes that “need to be covered”. It is as quirky and diverse, as full of clashing influences, as the members themselves. From the villages of Cameroon, the halls of Harvard, the palaces of Versailles, the boweries of Bristol, to the squares of Provence, Lyon France’s Dynamics create a music that is timeless, both vintage and fresh. They wield their instruments and machines to build a bed for the innocence and honesty of this soulful vocal trio. Everything from pop, roots, disco, soul and rock is distilled through their fuzzy hypnotic filters. The result is a sound that brings you to place, both modern and nostalgic. You should not be surprised to see Madonna, following Curtis Mayfield or the White Stripes on this tracklisting.