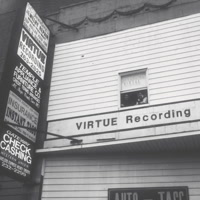 Born January 21st, 1923, Frank Virtue was a Philadelphia musician, record producer and record label owner whose career stretched from the big bands of the 1940s to the hip-hop and rap of the 1990s. As a 15-year-old living in South Philadelphia he began to play the guitar and upright bass. He studied classical bass and upon high school graduation Frank entered Temple University and studied electrical engineering and musical arranging.

After he was discharged from the service in 1947 he formed the Virtuoso Trio who later became the Virtues. In 1958, the Virtues recorded Guitar Boogie Shuffle which became a major hit in the U.S., reaching No. 3 on the Billboard chart and No. 1 in sales of sheet music. The song sold more than two million copies worldwide. Frank Virtue disbanded the group in 1962 when he went full time into the recording studio business.

Frank Virtue built his first studio, Virtue Recording Lab, in the basement of his house at 8500 Fayette Street. Guitar Boogie Shuffle was recorded there. The revenue from Guitar Boogie Shuffle helped finance the Virtue Recording Studio in late 1962 at 1618 North Broad Street. During the 1960s many hit records were recorded at Virtue, e.g. The Horse by Cliff Nobles & Co. and Boogaloo Down Broadway by Fantastic Johnny C. to name just two. Virtue Studios had a package deal where a group could pay a flat fee of $300-$500, record two songs, and have them pressed as a 45 on their own label, or on the Virtue house label. This package deal resulted in some of the most unusual sounding, low-fidelity soul and garage 45s that are highly sought after today.

Contrary to popular belief, Virtue Studios did not close in the early 80s. During the 1980s through the early 1990s, Virtue Studios was the home of a number of rap groups. A few months after Frank Virtue passed away Saturday, June 11th, 1994 at age 71, the studio was sold to another party who ran a recording studio at that same location for a few years before going out of business. The owner of the building sold the historic 1618 North Broad Street property to Temple University who then knocked the building down around the year 2001. Today, there is no trace or historical marker that Virtue Recording Studios ever existed, except for the music, records and acetates that have survived the ravages of time.