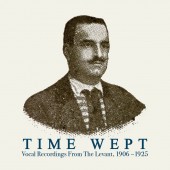 Stunningly beautiful, poignant music from Bilād al-Shām — ‘the countries of Damascus’, known nowadays as Syria, Lebanon and Palestine — including performances from the very first recording sessions in the region.

Even at the time, notwithstanding such brilliance, public music-making was frowned upon as morally demeaning, especially for women. Musical venues were generally dodgy. Ṣulbān once cut short a wedding performance for the Beiruti posh, after just one song, he was so disgusted with his audience.

‘If I had to tell you about the catcalls,’ one commentator wrote about the musical theatre of the time, ‘the stomping of feet, the sound of sticks hitting the ground, the noise of the water-pipes, the teeth cracking watermelon seeds and pistachio nuts, the screams of the waiters, and the clinking of arak glasses on the tables, one would need to go on and on and on…’