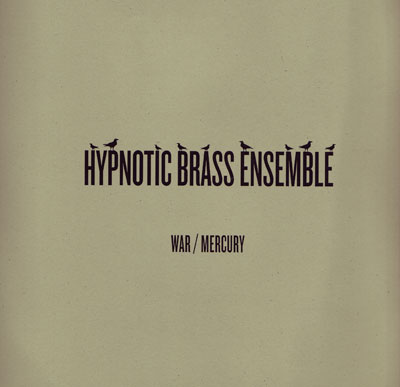 Those Hypnotic Brass Ensemble are back with their brilliant 2nd EP!!
“War” is pure battle sound from beginning to end: it draws your blood and attunes you to the conflict you face. Any master fighter can tell you the realest war is not the one flashing on your television or the one sparking in these streets; it’s the one waged within. We dedicate this song to all our gutter people in the world that they be spiritually uplifted and psychologically prepared for the struggles that surround them. The tones in “Mercury” are based on an ancient Chinese weather tactic whereby an emperor, having assembled his troops for battle, would call on a priest or a shaman to send rainstorms over a rival’s army. But while that idea illustrates the scope of military theater, the song’s solos represent the ritual of warfare from the perspective of a faceless soldier thousands of years ago: the preparation for battle, the drama of the battle itself and finally, the joy and elation a man feels when he’s won the battle and rejoins his family in the village.