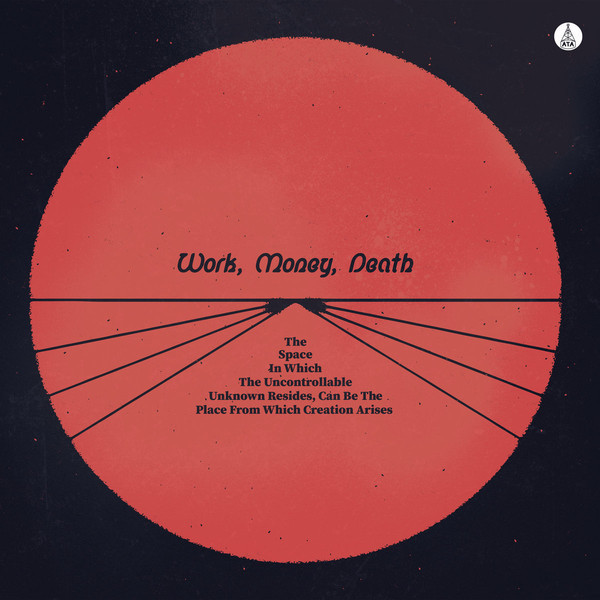 Work, Money, Death ‎– The Space In Which The Uncontrollable Unknown Resides, Can Be The Place From Which Creation Arises

A transcendental journey that takes in meditative musical mantras, sprawling tenor sax improvisation and mesmeric percussion, the new album by Work Money Death seeks to reinterpret the sound of artists such as Pharoah Sanders & Alice Coltrane over two tracks

Originally conceived as a large scale group performance of a single extended piece “The space in which the uncontrollable unknown resides, can be the place from which creation arises” was written by Tony and Neil through a series of extended improvisations similar to the extended meditation sessions that both musicians practice. These sessions enabled a state of flow through which Tony’s compositional approach to improvisation yielded meaningful melodic fragments that would be returned to and developed in a way similar to someone returning to the mantra.

Due to restrictions in the UK in the spring/summer of 2020 a different approach to the recording of the album had to be undertaken. Instead of the group recording at the same time in the studio, each musician would arrive and record their part separately as one continuous performance, reacting to the performances of each previous musician in an organic and constantly evolving way. It was in the midst of this process that the title was chosen, as a reflection of the understanding that from this new unknown way of working new creative avenues can be explored and should be embraced.

Track 1, “Dusk” begins with tanpura, harmonium, hypnotic percussion & bass onto which Tony Burkill (Sax) and Adam Fairhall (Piano) interweave improvisational ideas around Tony’s recurring main theme until the piece melts into a fierce collective improvisation that resolves itself into the final minutes. Track 2, “Dawn” begins with Tony’s tenor sax saluting the coming of a new day before the rest of the band embark on a groove reminiscent of Pharoah Sanders gentler moments, played with a hopefulness that contrasts the chaos of the ending of “Dusk”. Bells, drums, bamboo xylophones and woodblocks underpin the theme before Adam’s piano solo builds into a launchpad for Tony’s sax as French horn, flute and bass clarinet can be heard in the distance. The vocal refrain “Love is all I give to you” draws the track to a close.